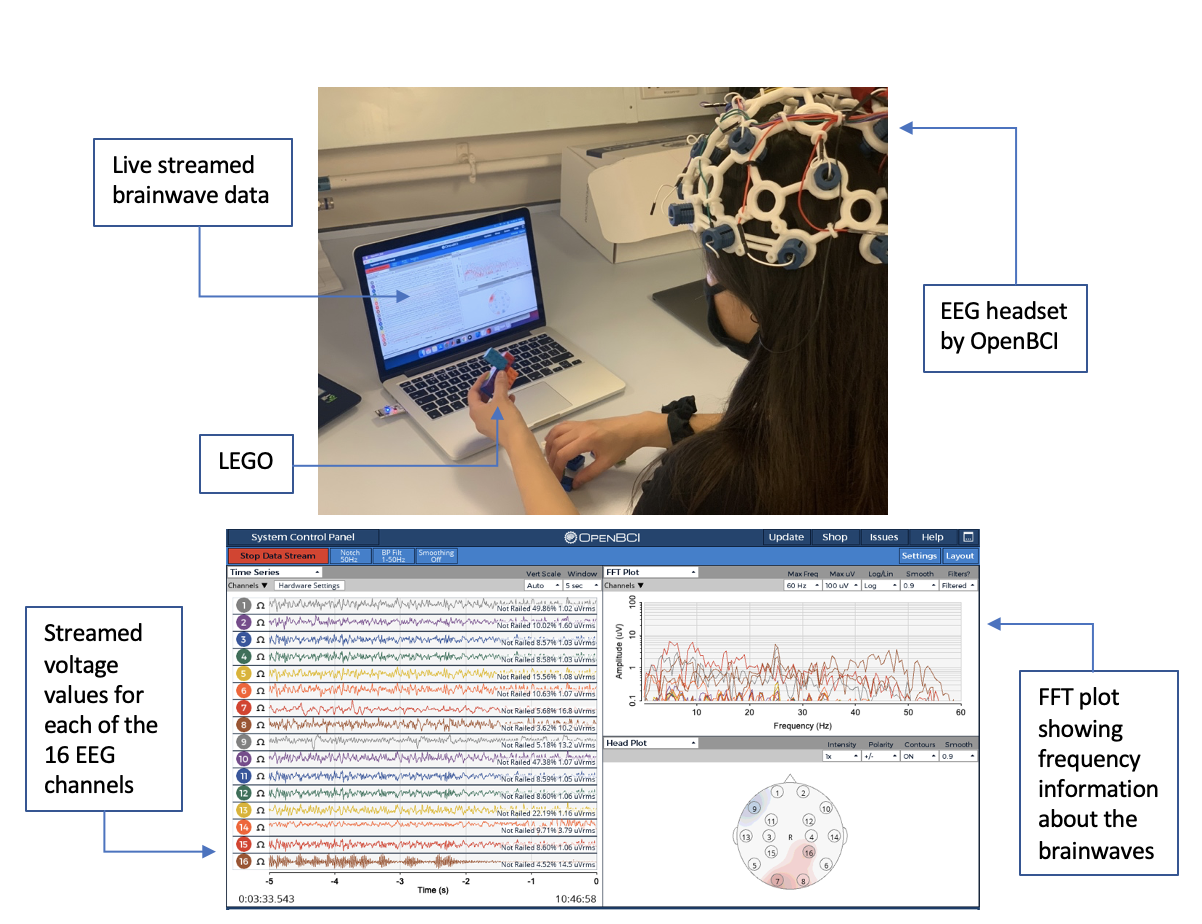 Summary of project and intended outcomes

In my individual research project this term I investigated potential alternative user interfaces for computer-aided design, CAD, software and brain-computer interfaces in particular. That is looking into the prospects of making designing more intuitive and accessible by introducing brain control to the design process in contrast to the current means including relying on the traditional use of a computer.

The aim of this project was to take what I learnt in my study and build onto that, looking at how brain-computer interfaces may be implemented in reality. The goal was also to use the valuable insights gained during this process and take a step back, to investigate how designing in its different formats is perceived by the brain.

Progress made and key results

During this internship we were able to try the signal analysis methods we previously studied to process our own recorded electroencephalography, EEG, data to try and identify valuable features for brain-computer interfaces and control of CAD. With it proving difficult to perform perfect brain-controlled actions with the interface, the most important progress made was realising the complexity of EEG data recording and signal processing in reality and in real-time. Starting with putting the EEG recording headsets together and managing to produce and evaluate our own data sets, we were able to identify requirements for a successful brain-computer interface, BCI, including good environmental conditions such as a quiet room for recording and well-fitting recording equipment.

With this collection of learnings, a written guide was put together to instruct any future users of the headsets on how to prepare for and record EEG data successfully. This documentation ensures that any valuable discoveries we made during our time spent working with the tools can be passed on, hopefully providing a more efficient start to whomever will work with this equipment or EEG data in general next.

Having identified what it takes to perfect brain-computer interfaces, we went from looking at how to use the brain to control the design to looking into what the designing process does to the brain. The beginning of a study was planned in which the difference in brain activation is to be studied between designing using physical versus digital means. Specifically, the idea is to let the subjects build a structure, a spaceship for example, with LEGO given some constraints and then attempting the same task but in a CAD-like environment with LEGO pieces on a computer. One hypothesis is that there is a noticeable difference in the activations of the brain areas between the two approaches of designing. The results found will give valuable insights into how the human mind perceives a designing challenge depending on in what format it is given and could shape how tasks are given to adapt to a desired response in the future of designing. Currently, the study is at the stage of initial rounds of recording sessions. This includes trying out and shaping the tasks and instructions to figure out the layout of the experiments, as well as seeing if data can be recorded as desired.

Next steps for the project

The next steps for this project are to finalise the set-up of the tests, further formulate the hypotheses and all in all get the study going by running experiments and collecting data. Once brainwave data is collected it can be analysed and compared. The target is to take this project that is currently in its early stages and produce a conference paper on the findings.

Positive impacts and what was learnt from the experience

This project and internship have had many positive impacts on me personally. First of all, getting a more proper end to the individual research project this term has been very much appreciated. It has been very exciting to be able to apply what theory and ideas I worked on during the year to something to work physically on this summer and it has not only piqued my interest in EEG brain interfaces and analysis but also in designing as a field to study in general.

It has been very insightful for me to get a glimpse of the world of research and it has changed the way I think of it. I have gained a much better understanding of what it takes to build a project, the balance between finding something that will spark the curiosity of oneself and the community and that will also result in something relevant and valuable, that will contribute to the works of tomorrow. I have gained more experience in defining a project, modifying it as needed in a more systematic way than before.

Being a part of a research group and working as a team has been a great experience. It made me realise even more that a big part of engineering is about sharing what you are good at with others and allowing them to teach you their skills. It has been very encouraging to be surrounded with such welcoming and helpful people!